Last Update May 2019 – If you are a metal guitar player, you are probably perfectly aware of the fact that the heavy music requires entirely an different sensibility and equipment of its own.

This goes to both guitars and amps, although it can be argued that the amps play a crucial role in locking in that crunchy metal tone.

We believe that the sound of metal should be nurtured in every sonic surrounding if that’s your sonic preference, hence we decided to embark on a journey of sifting through today’s market and singling out the best practice amp for metal.

Our quest yielded three worthy champions, all of which patiently await in the rundown below. 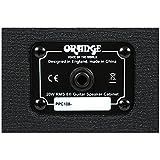 We’ll get the thing on the move with a touch of Terror! Coming from the legendary Orange, the Tiny Terror is a match made in hell, featuring a small 8-inch speaker cabinet  and a small amp head packed with crushing, sludgy metal notes.

The amp delivers a total of 20 watts of power and utilizes only the basic Shape and Gain controls. However, cranking up the Gain knob will provide you with a roar we have never seen in a budget friendly amp such as this! Also included in the mix is a sleek design and a sturdy casing.

Think of such heavy metal icons as Tony Iommi of Black Sabbath and you will get a fairly clear image of what this amp’s sound is like.

Very much on the crunchy side, the item boasts an organic and natural sound reminiscent to classic tube models, only in a small package. The amp has enough power to sustain smaller jam sessions, which is a major plus.

If you want  an amp you can use for band practice, this is your best pick – the Marshall MG30CFX. With 30 watts of power presented through a single 10-inch speaker, the product utilizes a set of four different channels with extra attention given to the crunchy side.

The legendary Marshall sounds needs no introduction, as we are after all talking about the company that shaped the guitar-heavy sound for half a century. From Jimi Hendrix to Slayer’s Kerry King, the company’s crunchy vibes are now instantly recognizable, and cranking a Marshall Gain knob to 11 is is somewhat of a cathartic experience now.

We are talking about exceptionally strong middle frequencies that cut through any mix. Additionally, you can switch right to the Solo channel for an injection of the higher registry for the ultimate metal solo tone.

As perhaps the most versatile practice amp in the world, the Peavey Vypyr is capable of tackling any musical genre you can think of, including metal. With 20 watts of power delivered though a single 8-inch speaker, the amp packs a whopping total of 25 different guitar effects, 36 built-in amp models, 6 bass amp models, and 6 acoustic amp models.

With these features, you can craft any sound you’ve imagined, lay a stellar metalized foundation and infuse it with any other style you want to spice things up. If you are on the experimental side, if you love progressive music, if you want to push the envelope, this is the one you’ve been looking for.

What’s very cool about the Vypyr is that despite containing thousands of sonic varieties, none of them sound bad. You will never end up with a genuinely poor sonic output, but rather with different variations of quality sound you may or may not personally like.

No matter whether you’re a beginner or a pro, this amplifier will always have something new and interesting in store for you. Thumbs up!

Therefore, when all is said, done and combined, each of these three products could take home the flattering title of the best practice amp for metal. It is now matter of jotting down your personal needs and preferences and thinking about what exactly do you need from an amp.

Once that is out of the way, you will have a clear image and you will be able to name the amplifier here that suits you the best. Look around, take your time, and treat yourself to one of these bad boys whenever you like!

We use cookies and similar technologies to measure traffic, repeat visitors and site performance. Learn more about cookies (Read More button). By clicking “Ok” or by continuing to use our site you consent to the use of cookies.OkRead more